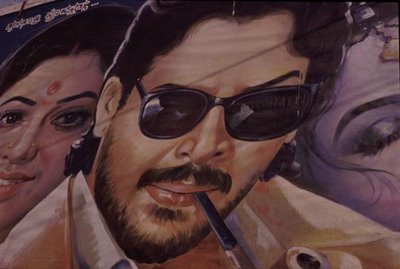 India, the world’s largest film producing nation, has gone global. With over 1000 films produced every year in Hindi, Bengali and 26 different languages, Mumbai, formerly known as Bombay, has become the center of a unique entertainment universe. Known as ‘Bollywood’ - a term used in the 1970’s to convey to the world that Bombay was a rival to Hollywood - the Indian film industry now employs over 2 million people and is dedicated to making a continent laugh and dance its troubles away.

Bollywood’s fame now outstrips Hollywood's. Believe it or not...with a global audience of 3.6 billion from Singapore to Seattle, its bigger and bouncier than Hollywood’s 2.6 billion audience, and the films which are produced in India have become the great social stabilizer which keeps this country from bursting at its seams. With an ever growing population and a great fan of India culture, I decided to travel to the heart of the Indian movie madness in Mumbai, in search of- what else- the Bollywood dream.

For many non-Indians, like myself, the Bollywood adventure begins long before you reach India. Shortly after take off from Newark, New York on the Air India flight 144, I was served my first steaming dish of hot curry and my first Bollywood movie. I didn’t know which one was spicier. The movie or the food.

As we cruised 36,000 feet on the 20 hour trek half way around the world, I noticed my fellow passengers transfixed by the images which flashed across the movie screen. There were a lot of beautiful women dressed in their traditional ‘saris’, dancing and singing. Several good looking guys, in their Saturday Night Fever outfits, waving at the beautiful girls, dancing and singing too. There was some more dancing, hip thrusting, tears, and more singing. 'This is a sad movie' said the passenger in seat 34B, as I fumbled for my plastic headset. It’s a ‘boy looses girl’ story. When the movie ended, we were somewhere over Europe, and the boy, finally, got the girl, and probably needed hip replacement.

Five Bollywood movies later, jet lag and with a funny tummy, I found myself driving up to the gates of ‘Film City’ on the northern most outskirts of Mumbai, India’s sprawling industrial and commercial city of 18 million. The dream of ‘Bollywood’, begins when the black tide of humanity ends and the Mumbai madness retreats in the distance.
On 516 acres of lush forested woodlands, ‘Film City’ is the artistic oasis of India’s film industry and the jewel in the crown for its international productions. Founded in 1977 to promote regional cinema in the state of Maharastra ‘Film City’ produces almost 400 movies a year, 40% of the national average. ‘Film City,’ like everything in India, is as monumental as the Taj Mahal. There are 18 air conditioned studios, editing suites, big and small sets,and a ‘set’ for virtually everything.
Need a genuine country village ‘set’ or recreate a town square to shoot your next Ghandi epic ? Film City has it. One can even step up to the small Hindu temple for a quick ‘pooja’ (prayer) for the success of your next movie. It’s all included in the price of using the facilities of Film City.
Yet, the Hindu temple hasn't seem a lot of activity in recent years, as Indian productions have become a guaranteed success at the box office, and many movies are now shot on foreign soil. “You can double your money here in Film City’, says Krishnan Mehta, an eextra on a shoot in the Film City.‘The returns on your investment are sure’ he claims as we drink yet another cup of chai, strong Indian tea.
In a country in which 14 million people go a see a movie everyday and 6 billion tickets are sold each year at theatres across India, ‘failure’ is a word not common in Bollywood circles. Yet besides the large quantities of money which go in to financing these movies, and the huge rewards they may reap, I am still baffled by what secret ingredient makes a Bollywood movie a blockbuster.
And Bollywood is everywhere. From movie posters plastered across store fronts and lamp posts to elegant homes and train stations, to the Bollywood soundtrack CD’s sold on street corners and inlocal markets. Bollywood is bouyant. Bollywood creates the trends and markets everything from basic household appliances to fancy electronic gadgets. National newspapers dedicate entire sections to the latest actors and Bollywoodian gossip and India’s internet sector has developed sites and links so that fans across the globe can log in, post and chat with their favorite stars.
For Mehta, the secret lies with India’s rich cultural past. ‘The movies are not about killing people, or taking your clothes off. We write stories of love’ he affirms. In west there is a gap, between what you see and what you feel. In India, Bollywood makes you feel that every film ‘is my story’. And taking ‘my story’ to the big screen, can be an epic undertaking. Like everything else in India.
The average movie in India lasts close to three hours, and employs hundreds of extras. The films are usually about class interrelationships and family values, in which the leading protagonists go through a series of emotional trials, and resolve complex personal issues. Usually the actors end up questioning their very existence, and reaffiriming their belief in destiny, and life, and everything in between.
Movie with titles such as‘Tomorrow may never come’ (Koo Ha na Hoo) or ‘The Miracles of Destiny’ are big sellers. Very existential for a country that gave the world gurus, yoga and the concept of re-incarnation. So as I dig deeper into the Bollywood illusion, it seems that the success of a movie, also has a lot to do with something more divine- Indian women.

Given the amount of attention Bollywood has been getting recently in the international press, I agree with my guide Pushnatan’s appreciation that Indian film has become enchanting as a result of ‘its heroines and beautiful women’. The bejeweled leading women of film, like star Aishwarya (Ash) Rai, who recently graced the front cover of Time magazine as the ‘new face of cinema’, are modern day role models for thousands of Indian working women -who are increasingly, educated, career oriented and mobile.
And although it might take some time for us on this side of the world to pronounce the names of India’s leading men and women of celluloid like Aishwayra Rai, Amitabh Bachchan or Shahrukh Kahn, the fact is that India’s superstars,may become household names in the US if Bollywood continues it grip on the world.
‘There is a large Indian community around the world hungry for home grown entertainment’ claims Singh, a lingerie importer from New York, who travels regularily to Mumbai on business. ‘The escapist elements in Indian film, like the songs and the dance have a universal appeal’.
And the Bollywood appeal has started to influence important film directors such as Baz Luhrman, whose hit Moulin Rouge was undoubtedly a Bollywood inspired film and big US film distributors have begun distributing Bollywood films worldwide.
According to Indian film director Mira Nair of Monsoon wedding and Mississipi Masala fame, in a recent interview with Time magazine, Aishwarya Rai ‘will be the next Penelope Cruz’. Affirmations which predict well for Bollywood’s future.
But Bollywood is more than just beautiful faces and bountiful talent. As I walk up to some good looking actors whispering on their cell phones, under the burning midday sun, it is clear that the secret of Bollywood’s success is that it is above all else, truly Indian. From the clothes, to the music and the hypnotic dancing, Bollywood caters to the India’s masses. ‘They (Bollywood) build the dreams of the common man’ says Sanjeev Prasad of an important government ministry, in his protocol voice. ‘In India people can go without a meal. But they cannot go without movie’. And Bollywood is the great dream machine that makes it real.
Posted by Richard Emblin at 8:57 AM

hey,
thanks for the excellent write-up on our 'bollywood'
a madly in love with movies indian
adi

Great article about Bollywood! I had my wife read it, too, because she is facinated with Indian culture. You were wondering about the next DVD in our series... We are going to teach four kids how to scuba dive and then search for manta rays, dolphins and other exotic animals of the ocean.

hi richard
its been a long time since i had a look up ur blog!a very good write up...makes me feel like going for a movie tom...
first day first show!